The Cellist of Sarajevo (Paperback) 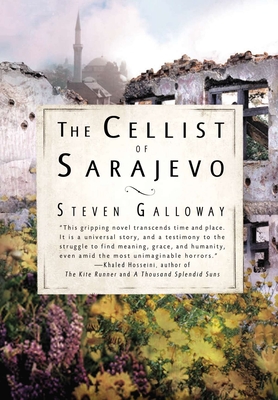 By Steven Galloway
$17.00
Email or call for price

“Inspired by the Sarajevo musician who, risking sniper fire, played his cello for 22 afternoons in honor of the 22 killed while standing in a breadline, this slim but powerful novel explores aspects of war not often addressed. Scenes of sorrow and danger, sacrifice and compromise make this a novel I will never forget.”
— Leslie Reiner, Inkwood Books, Tampa, FL

“Twenty-two people are killed in a mortar attack during the siege of Sarajevo. In response, a cellist decides to play at the site of the attack for 22 days. The Cellist of Sarajevo celebrates small acts of courage by ordinary people as they struggle to survive under dangerous circumstances.”
— Sally Wizik Wills, Sister Wolf Books, Park Rapids, MN

“Focusing on three concisely developed, unrelated characters and an unnamed cellist who has vowed to play for 22 days in memory of 22 people who have died in a mortar attack on war-torn Sarajevo, Galloway creates individual portraits that combine in a stunning picture of what it takes to survive in a city under siege. Spare narration and haunting voice make this a must-read.”
— Peter Marsh, Briggs Carriage Bookstore, Brandon, VT

A spare and haunting, wise and beautiful novel about war and the endurance of the human spirit and the subtle ways individuals reclaim their humanity.

In a city under siege, four people whose lives have been upended are ultimately reminded of what it is to be human. From his window, a musician sees twenty-two of his friends and neighbors waiting in a breadline. Then, in a flash, they are killed by a mortar attack. In an act of defiance, the man picks up his cello and decides to play at the site of the shelling for twenty-two days, honoring their memory. Elsewhere, a young man leaves home to collect drinking water for his family and, in the face of danger, must weigh the value of generosity against selfish survivalism. A third man, older, sets off in search of bread and distraction and instead runs into a long-ago friend who reminds him of the city he thought he had lost, and the man he once was. As both men are drawn into the orbit of cello music, a fourth character—a young woman, a sniper—holds the fate of the cellist in her hands. As she protects him with her life, her own army prepares to challenge the kind of person she has become.

A novel of great intensity and power, and inspired by a true story, The Cellist of Sarajevo poignantly explores how war can change one’s definition of humanity, the effect of music on our emotional endurance, and how a romance with the rituals of daily life can itself be a form of resistance.

Steven Galloway lives in British Columbia and teaches creative writing at the University of British Coumbia.