Enjoy the Journey: Scenes from a Life On & Off the Road (Paperback) 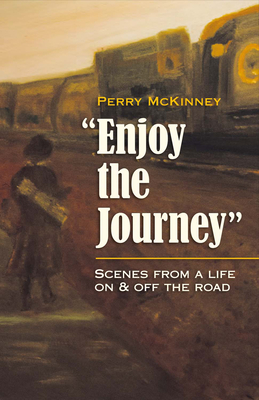 By Perry McKinney
$16.95
Email or call for price

Enjoy the Journey spans, with brevity but great candor and sensitivity, the life thus far of Perry McKinney, who traded early that of a successful entrepreneur for that of a hobo in the traditional sense of the word. His story begins in the then-military town of Portsmouth, New Hampshire. Looked after to the extent that he was able by their divorced father, Perry, identical twin Conrad, and two sisters lived with their alcoholic mother, the boys shining shoes in Portsmouth’s 20 or so bars to earn money for necessities until all the children were removed to foster homes.

More or less a “loner” from youth, Perry nevertheless describes, matter-of-factly, but with genuine appreciation and fondness, a handful of associates and friends as well as immediate and extended family, and a pair of boats that afforded dramatically different experiences. A run for class president taught Perry all he wanted to know about politics, the library how much is to be learned from books, and observation of animals much of what he came to understand about life.

Perry imparts the flavor of the Portsmouth in which he grew up, of its local “institutions,” and of a short-lived business career, begun while still in high school, that amassed considerable holdings worth substantial sums before he chucked it all to “hit the road” in earnest. Those travels took him far afield, deep into the south and far into the north. Perry learned early to plan his itineraries around cities in order to avoid trouble, and a natural affability served him well when riding in the cars of strangers.

How to dress effectively for the cold, to build a fire in a boxcar, and forage for food and drink in field and convenience store were among the survival skills cultivated by Perry, whose lifelong love of animals impelled him to share with them whatever largesse he came by. Two skunks, in particular, became fast friends for the duration of a return to Portsmouth during which Perry made his home under a bridge.

Although Perry wasn’t bothered by, indeed, found peace and joy in, the frequent aloneness he experienced, over time the comfort afforded by vodka took a toll on his health. He ultimately ended up in hospital, and eventually, with the support of his brother, with whom he reconnected periodically throughout his years “on the road,” in rehab.

The new millennium found Perry back in mainstream life, surprised and baffled by cell phones and cars with computers that honked when locked. He accepted into his life a bare minimum of all this “progress”—he declined a laptop and blackberry, but accepted a simple phone with which he could keep in touch with family and a handful of friends; he acquired a turn-of-the-century automobile that he only later discovered incorporated a rudimentary computer (that has been the only thing to malfunction in the vehicle).

Perry painted houses in his youth, began to paint in watercolors and oils during his travels. Today, comfortably resettled in the community of his birth, Perry continues to express himself through this talent, and a newfound penchant for writing. He also continues to befriend animals, a pair of seagulls among frequent visitors to the small building from which he administers a municipal boat launch. This modest structure is also significant in having reunited Perry briefly with one of his dearest of human friends, who passed away during the writing of this book, and in being the focus of what has become an enduring tradition at Christmastime—as the Portsmouth Naval Shipyard across the river from Perry’s “shack” replaces each year with red and green many of the white lights in the enormous stiff-leg derrick that towers over the facility, so Perry drapes along the roof and onto a small pine tree from his late friend’s tree farm a string of vintage-style lights of the large bulb variety.

Perry McKinney was born and raised in Portsmouth, New Hampshire, where he presently resides, and to which he returned periodically during years of hitchhiking, riding the rails, and camping out throughout the United States, Alaska (but not Hawaii) included, and Canada. Perry’s journey hither and yon was an intermittent one, beginning in his youth, interrupted by school, marriage, and raising four sons and three nephews, resuming in his 50s, and continuing into his mid-60s. Perry and identical twin Conrad took recourse to entrepreneurship at an early age to secure the necessities of life. A port city with Navy, Marine, and Air Force bases, Portsmouth afforded many opportunities for inventive and ambitious youth; shining shoes at the more than 20 bars in the city inspired Perry and Conrad to pursue other odd jobs. While Conrad remained in school working hard, and often filling in for Perry in his classes, Perry pursued his entrepreneurial bent, painting houses, then buying houses and converting them into apartments, the first when he was still in high school. Bitten as well by the travel bug, Perry began hitchhiking when he was around 12 years old, regularly making day trips into Maine, Massachusetts, and Connecticut. Once he proved to some friends, by producing a receipt for donuts purchased at a shop there, that he’d been to New York City that very day! Perry married wife Sherry, whom he’d met while in junior high, when she graduated from high school. They had four children, and Perry became quite successful in real estate and business. Then, at age twenty-nine, Sherry died suddenly. His sister-in-law moved in with her four children to help a stunned and devastated Perry raise his children, then aged three to thirteen. In his late thirties, Perry took a hiatus from his business interests to travel to northern Canada to make a documentary film about the iron ore trains that carried Indians from Churchill Falls to Labrador. The fruits of that trip were lost in a fire in a barn in which his stock of photos was stored. Still mourning the loss of the love of his life as his children grew into their teens, Perry became more consumed with drinking. When his last child was eighteen and all of the children were off to higher education and independence, Perry let his real estate and businesses go, to relatives and the banks. Having always loved nature, he took recourse to it, living in the woods, in boxcars, and on the streets. Carrying only a sleeping bag and what essentials fit into his leather shoulder bag, Perry took to the road . . . and rails. Though he appeared, and was generally regarded to be, “homeless,” Perry never felt so, characterizing himself instead as “a happy camper” during the several decades he spent hitchhiking, riding the rails, and camping throughout the United States and Canada. Reaching retirement age was baffling to Perry, as he had nothing to retire from, having always, even as a hobo, worked for himself. But his years of being unburdened by business issues and in the quiet of nature had rekindled Perry’s interest in and talent for painting, and he finished many oils, most of which he gave away. Discovering that he could take classes at the University of New Hampshire for free, he started taking an oil painting class to learn more about mixing colors. He took two art courses, in both of which he earned an “A,” but because he wasn’t interested in credits hadn’t registered for either. After a few stints in rehabilitation and successful recovery, Perry took an apartment in Portsmouth. Back home, he has recovered his earlier creative zest for life. His habit of spotting houses that could be gotten cheap and converted into apartments is still apparent, but quickly put out of mind. Perry’s is a simpler life now, composed of exercising, attending meetings, visiting with his sons, grandchildren, twin brother, and friends, writing stories of his experiences, and, once again, painting. Born of the life he lived, Perry’s motto is: “Enjoy the journey.”