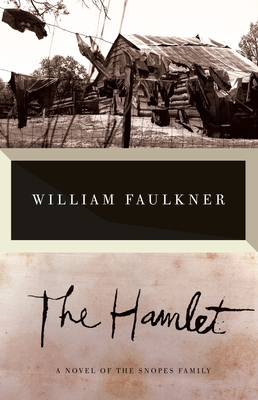 The Hamlet, the first novel of Faulkner's Snopes trilogy, is both an ironic take on classical tragedy and a mordant commentary on the grand pretensions of the antebellum South and the depths of its decay in the aftermath of war and Reconstruction. It tells of the advent and the rise of the Snopes family in Frenchman's Bend, a small town built on the ruins of a once-stately plantation. Flem Snopes -- wily, energetic, a man of shady origins -- quickly comes to dominate the town and its people with his cunning and guile.

William Faulkner was born in New Albany, Mississippi, on September 25, 1897. He published his first book, The Marble Faun (a collection of poems), in 1924, and his first novel, Soldier's Pay, in 1926. In 1949, having written such works as Absalom, Absalom!, As I Lay Dying, Light in August, and The Sound and the Fury, Faulkner was awarded the Nobel Prize for Literature. He also received the Pulitzer Prize for two other novels, A Fable (1954) and The Reivers (1962). From 1957 to 1958 he was Writer-in-Residence at the University of Virginia. He died on July 6, 1962, in Byhalia, Mississippi.